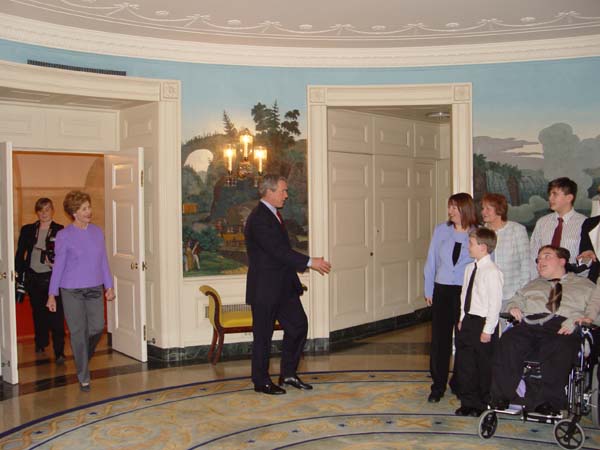 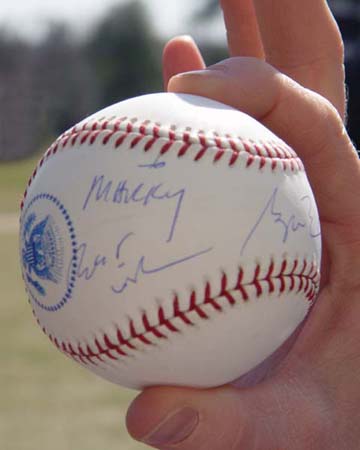 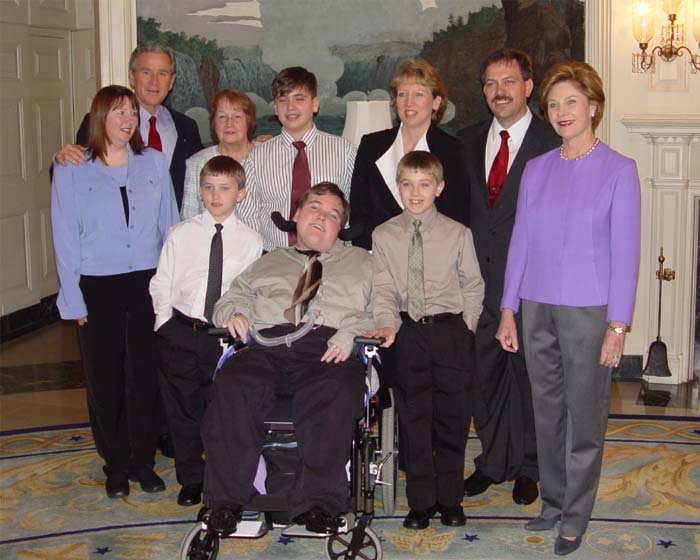 President Bush was most gracious and engaging. After greetings and handshakes all around, he joined us for a group photo --one hand resting on my shoulder, the other on that of the other nurse. He then appropriately focused on the kids(siblings included) -- giving each a Presidential Seal tie-tack type pin. As per the local newspaper photo, President Bush fastened the seal on Marc's shirt himself, then presented him with a baseball (Marc's favorite sport). This, however, wasn't an ordinary baseball. This one sported the Presidential seal and a handwritten, "To Marc Buchholz, from George W. Bush."

Marc had been advised to prepare three questions to ask the President, but had time for only one. It was, "I know your job is a stressful one, what do you do for relaxation?"

Without missing a beat, The President replied, "Exercise and prayer. Knowing that The Almighty loves and cares for me, and that He cares more about this country than any of us can possibly imagine, gives peace. No matter what the situation, prayer provides a calming effect. It's central to my role as President." He hesitated, than added, "And family. Having a loving, supportive family is important, too."

A guide escorted us around the first floor of the White House Executive Mansion – that is the Corridors, the Library, and Vermeil Room. We passed by the empty Diplomatic Reception Room, where we'd met The President on Monday. Now, looking at a map from The White House website, I see we also missed the China Room and Map Room. Marc and the other boy reached the second floor via The President's elevator, but we ascended the broad marble stairway.

Upstairs, we started at the east end, taking in the huge East Room, then (going west) the Green Room, the Blue Room, the Red Room, the Dining Room and circled north back to the main Entrance and Cross Halls. I've given you at least one view of each of these areas. The walls, you may note, are covered with large paintings -- mostly of former Presidents. Besides getting the essence of each room, I busied myself taking pictures of pictures, trying to capture each Presidential painting. Now I hope to arrange them in chronological order. It ain't easy! These older guys don't always look like themselves (or, at least, other pix of themselves). 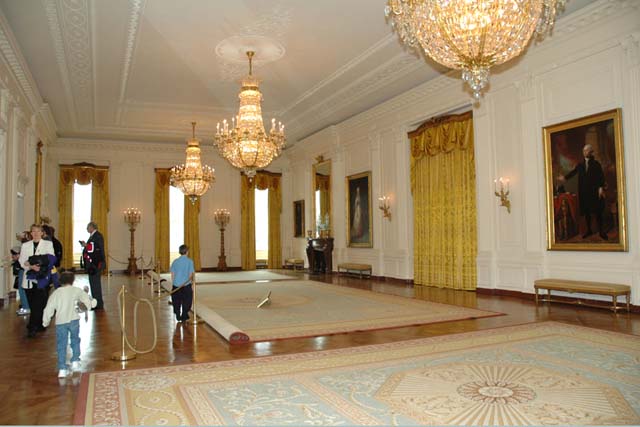 The guide, of course, told stories of events held in each room. The East Room, for example, hasn't just served as a ball room, as I'd imagined, but as a basket ball court, a wrestling ring, even a place to hang laundry. Now, John will tell you (and I'm sure he is right), that all this didn't occur in the room we saw. Besides the destructive fire from so long ago, President Truman had the entire White House gutted and rebuilt – so none of the rooms were the originals. 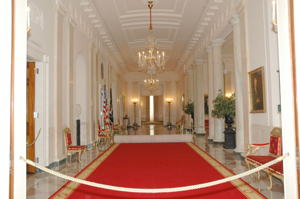 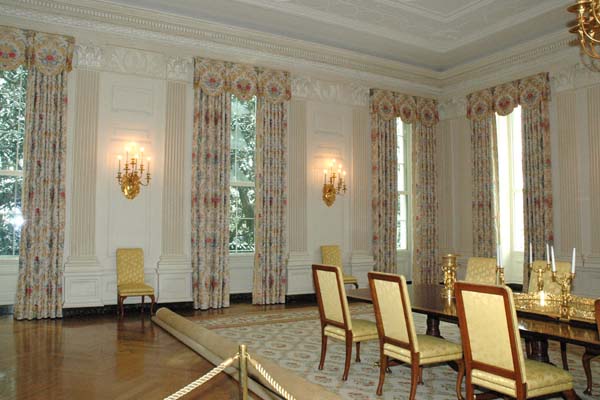 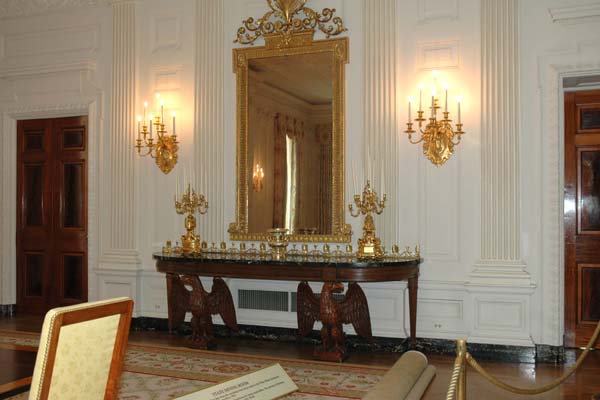 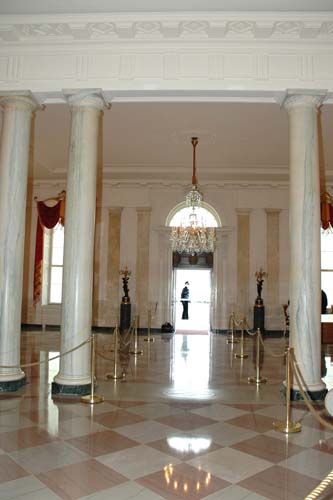 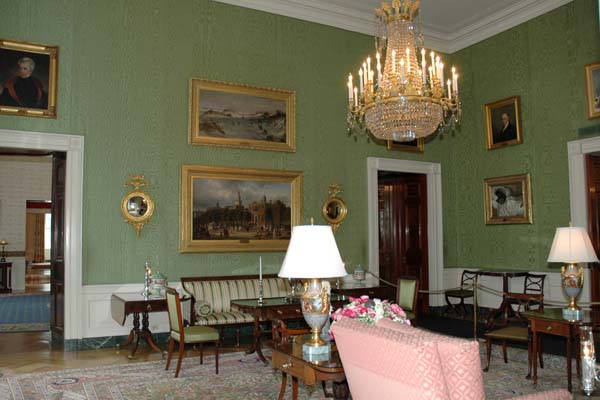 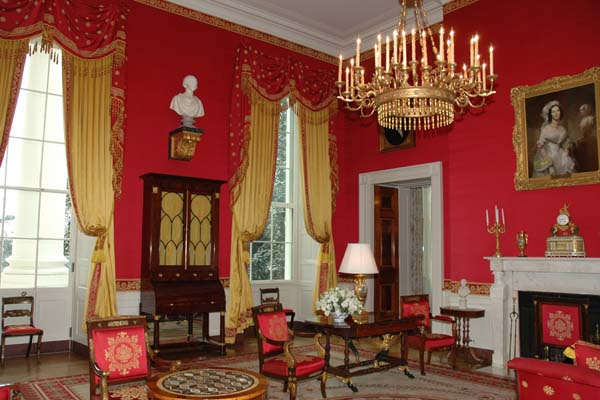 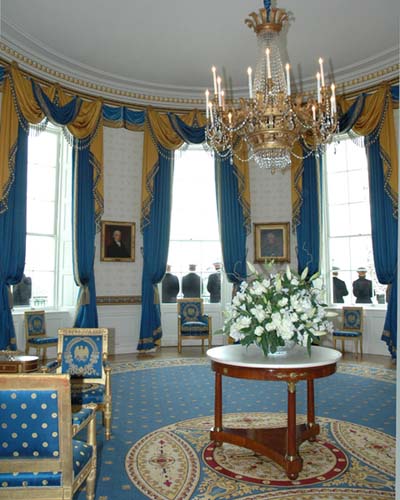 You may know that Jacqueline Kennedy's White House passion was to preserve its history -- decoratively. Apparently, most of the Blue Room's furnishings had been sold off and she set out to find them. She did, in some obscure antique store in Illinois (I think). So, the found pieces were redeemed and returned to the blue room. Admittedly, she never recovered them all, and had a few pieces replicated to complete the set.

My favorite rooms were the massive East Room, the cheerful Dining Room, the cozy Library and the majestic front Entrance and Cross Halls.

Our promised half-hour tour lasted over and hour and a half. When we emerged, the snow had stopped, it felt warmer, but the sky remained overcast – as seen in the photos of the White House exterior. By the time I'd returned to our hotel, the sky was blue and spattered with fluffy white clouds. Go figure! 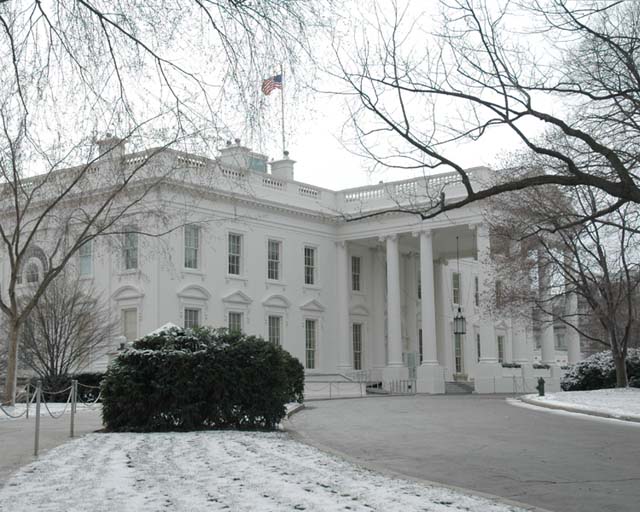 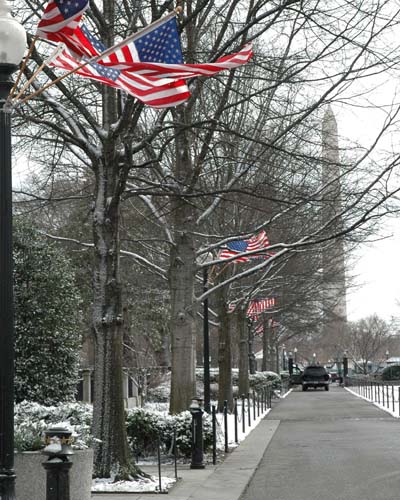 This had been a great tour, but not to be compared with our 20 minutes or so with The First Dog, First Lady and President, himself!

Having had only 3 hours of sleep for the past 3 days, I crashed on Wednesday and slept the whole day away until going on duty at 7 PM.

Thursday afternoon, I used my rented auto for a self-guided (don't know where I'm going) tour of Gettysburg. I stopped at the Hall of Presidents and, again, took photos of each and every one. From Washington to Bush, each had been cast in wax, and admittedly, not necessarily with great likeness. Our hefty 300-lb Pres. Taft, for instance, was depicted as slim. ...no, outright skinny. It made me wonder if they'd run out of wax. Whatever the cause, I found myself wishing that if I ever got depicted in wax, that I'd come out skinny, too! They did a special feature on Eisenhower, as at some time, he'd lived in the burgh.

The rest of the day found me tromping around muddy battlefields and cemeteries taking oodles of photos of statues and monuments -- not my favorite subjects, but historic, none the less. If you care to see them, I'll ship them. Otherwise, I'll refrain from boring you.

Friday found me working longer than usual, to relieve the day nurse who'd put in a few extra hours so I could capture those 3 hour naps earlier in the week. Saturday, we left early to return mid-afternoon.

...a week-long journey for a 20 minute encounter. But it was worth every second.